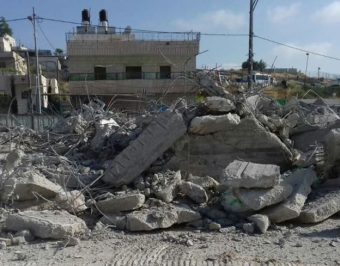 Israeli soldiers invaded, on Thursday morning, the at-Tour neighborhood, overlooking the Old City of occupied East Jerusalem, and al-‘Isawiyya town, in the center of the city, and demolished residential and commercial structures.

The demolished commercial structures are owned by Khalil Abu Sbeitan and Rami Sayyad; the army claimed there were built without construction permits.

Furthermore, the soldiers invaded the al-Walaja village, south of Jerusalem, and demolished three homes, owned by members of Abu Sneina and Nairoukh families.

The demolition came just one day after the Israeli Supreme Court ordered the resumption of the construction of the Annexation Wall, which will lead to the isolation and illegal confiscation of hundreds of Dunams of Palestinian lands.