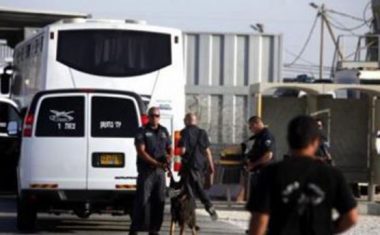 The Media Committee of the “Freedom and Dignity” hunger strike in Israeli prisons, said the Israeli Prison Authority has transferred, Thursday, 41 hunger striking detainees from Asqalan Prison to Ohali Kidar.

Â The committee stated that the soldiers conducted repeated and extensive invasions and searches of the detainees’ rooms and belongings, before transferring the 41 to Ohali Kidar.

It added that the detainees were forced out of their room into the prison yard, many times last night, and at dawn, during the extensive searches that lasted for several hours.

Israel resorts to repeated invasions into the rooms and sections of various detention centers, especially during hunger strikes, and constantly keeps transferring the detainees, inflicting more hardships on them to force them to end their strikes.

On the first day of the Freedom and Dignity hunger strike, 1,600 Palestinian prisoners refused food from within 22 Israeli prisons. The hunger strike commenced on Palestinian Prisoner Day, April 17, 2017.