MADA Calling for Wider Coalition to Defend Freedom of Expression 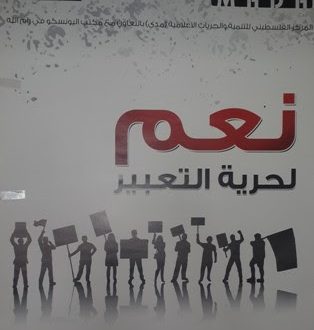 “We also continue the efforts aimed to discuss the reality of freedom of expression with all governmental and civil parties, through the round-table meeting which was postponed due to the strike on the last Thursday in solidarity with prisoners in Israeli jails, which we invited to, in partnership with the Department of Culture and Information in the Palestine Liberation Organization headed by Dr. Hanan Ashrawi, also with the Minister of Justice Mr. Ali Abu Diak, officials of the security services, representatives of civil organizations, and interested journalists.”

Internationally, we will continue to cooperate with all partners and international allies in order to bring out our initiative to form a “international moot/mock court” in order to “try the journalist’s killers around the world” in informal way.”

PNN reports that today, despite the passage of nearly 25 years after the United Nations adopted the 3rd of May as the World Press Freedom Day, in 1993, the status of media freedoms around the world and in the Arab countries, and Palestine in particular, is not satisfactory, where media and journalists are still a target of serious attacks that have not stopped escalating, attacks which strengthened self-censorship and weakened the expected role of the media in criticism and control of public performance in many countries.

Although the year 2016 marked a decrease in the number of violations against media freedoms in Palestine compared to the previous year, and though this is considered to be a reflection of the fluctuation of the pace of field events and general conditions, the trend of respect media freedoms has not witnessed any positive development that has been evident in recent months and days. Last March witnessed, for example, a very significant increase in the number and nature of attacks against media freedoms (51 attacks), the highest in 15 months.

A total of 96 attacks were monitored by MADA Center during the first quarter of 2017. MADA monitored a total of 383 violations against media freedoms in Palestine during 2016. The Israeli occupation committed 249 attacks (65%), while 134 violations (35%) were committed by Palestinians in the West Bank and Gaza.

The killing of Al Quds University media student, Iyad Omar Sajdiya (22), the detention and shooting of dozens of journalists, the raid, seizure, destruction and closure of 12 Palestinian media outlets and printing houses, and the approval of Israel’s “Facebook law” with the “understandings” reached with Facebook to remove content that Israel considers “provocative” is all considered to be the most dangerous and significant violations committed by Israel in the last year.

As for the Palestinian side, there has been an increase in the number of journalist abuse cases during interrogation or detention, and has been considered torturous, in some cases. This, as well as the continuation and expansion of prosecutions related to items published on social media networks,  show the increase in the size of the challenges and risks which face the media and journalists in Palestine and the world, when carrying out their work.

At the same time, the perpetrators of all attacks against journalists in Palestine are still free from prosecution, as well as in many countries of the world, which encourages them to commit more.