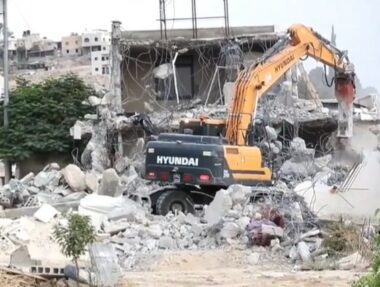 They added that the homes, 150 square/meters each, are owned by Abdul-Fattah Amin Abu Saleh, Abdul-Hamid Natsha, and Adel Ibrahim Atiya.

Two of the demolished homes were inhabited by the families, and one was still under construction.

The army claimed the properties were not licensed by the soldiers called “Civil Administration Office,” the administrative branch of the illegal occupation of the West Bank.

In occupied Jerusalem, the soldiers forced Sanad Al-Ajlouni to demolish a residential room in the Sa’adiyya neighborhood in the Old City; the room houses four family members.