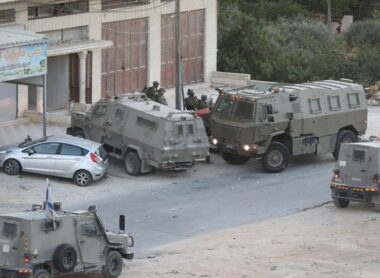 On Wednesday dawn, Israeli soldiers conducted massive invasions and violent searches of homes and abducted at least twenty-three Palestinians, including the brother of Ibrahim Nabulsi, 30, who was killed by the army on August 9, 2022.

The soldiers invaded many communities across the occupied West Bank, especially in Nablus, Jenin, Bethlehem, and Hebron, before searching and ransacking dozens of homes and abducting the Palestinians.

One of the abducted Palestinians, Eyad Nabulsi, is the brother of Ibrahim Nabulsi who was killed by the army in Nablus on August 9.

The soldiers also abducted Yahia Mabrouka, the uncle of Adham Jamal Abdul-Rahim Mabrouka, 26, who, on February 8, 2022, was assassinated by undercover Israeli soldiers in the Al-Makhfiyya neighborhood in Nablus.

In Ramallah, in the central West Bank, illegal Israeli colonizers attacked many Palestinian cars near villages west of the city.