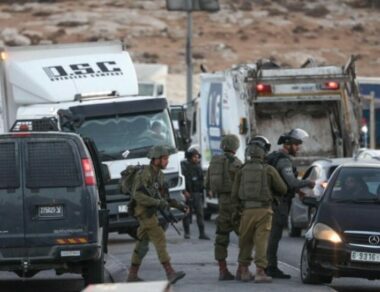 On Tuesday, the Maan News Agency quoted the Israeli army claiming that an Israeli colonialist settler was injured after being stabbed in the Al-Fondoq Palestinian town east of Qalqilia, in the northern part of the occupied West Bank.

The Israeli man, 55, went to the village for shopping before he was stabbed in the stomach and suffered moderate wounds. He was moved to an Israeli medical center.

The Israeli army claimed it “investigated the incident and decided it was an act of terrorism” because the attacker was reportedly a Palestinian who fled the scene, and the wounded man in an Israeli.

The army initiated an extensive search campaign in the area looking for the Palestinian and set up roadblocks.

According to Israeli media reports, the army managed to arrest the Palestinian, who allegedly stabbed the Israeli man, and moved him to an interrogation facility.