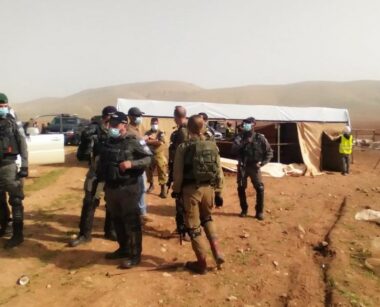 Hasan Mleihat, the supervisor of the Al-Baidar Organization for Defending the Rights of the Bedouins, said the soldiers demolished residential sheds owned by Mohammad Ali Rashayda, Emad Ali Rashayda, and Amin Mohammad Mleihat.

Mleihat added that the demolition is part of Israel’s ethnic cleansing policies against the Bedouins in occupied Palestine, by demolishing their dwelling and barns to force them to leave to replace them with illegal colonizers, in direct violation of International Law and all related agreements.

He called on various legal and human rights groups in the region and worldwide to act on defending the basic rights of the Palestinians by all possible means.

It is worth mentioning that the forcible systematic transfer of a civilian population is a crime against humanity and is punishable by the International Criminal Court, in addition to the fact that the United Nations have also included the forcible transfer of children in its list of acts of genocide.