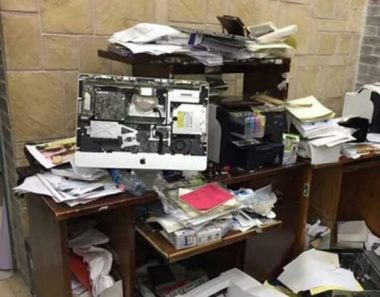 Dozens of soldiers invaded, on Wednesday at dawn, Tulkarem city, in the northern part of the occupied West Bank, and broke into a local print shop, before destroying many of its equipment, and confiscating machines.

Abdul-Rahim Badawi, the owner of the print shop, said a large military force invaded the area, before the soldiers broke into his shop, after smashing its main doors, and initiated violent searches, leading to excessive property damage.

He added that the soldiers confiscated most of his equipment, and destroyed several computers and machines, during the violent invasion and search.

Badawi further stated that his shop is licensed, and never received any notices or warnings from the Israeli military, or any other party.

The soldiers also invaded several neighborhoods in Tulkarem, before storming several buildings and violently searching them.

Also Wednesday, the army demolished a Palestinian home in the al-‘Isawiyya town, in occupied East Jerusalem, under the allegation of being built without a permit.

In related news, the soldiers abducted three Palestinians from Balata refugee camp, east of the northern West Bank city of Nablus, after stopping them at a sudden roadblock.