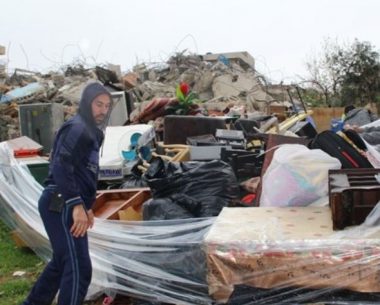 Dozens of soldiers and police officers, invaded on Wednesday at dawn, the al-‘Isawiyya town, in occupied East Jerusalem, and demolished a residential building housing thirty Palestinians, including children, under the pretext of being built without a permit.

The families living in the building were forced out of their apartments, while Jerusalem City Council workers, removed some of their furniture and belongings from the building, and placed them outside, under the rain, causing serious damage.

The invasion was carried out approximately at 4:30 at dawn; the residential building is owned by Khaled Nimir Mahmoud.

Mahmoud told Maan News Agency that he filed several applications with the City Council to license his building, starting in the year 2002, but his applications were all denied, and the Central Court recently denied an appeal filed by the family, asking for delaying the demolition.

His building was first demolished in 2002, and he rebuilt it in 2003, to provide housing for his family, and the families of Naim Kasteero and Ata Dirbas; 30 Palestinians, including four children, resided in the demolished two-story building of four apartments.

Mohammad Abu al-Hummus, the coordinator of the Follow-up Committee in al-‘Isawiyya, said the residents have been filing appeals with the Jerusalem City Council for the past 15 years, trying to get it to approve the Structural Maps presented through their lawyers, but were always met with rejections.

He called on the International Community to provide the needed protection to the Palestinian people, and their property, facing the ongoing illegal Israeli occupation, the constant violation of International Law, and all related international resolutions.

Israeli soldiers demolished, Wednesday, a Palestinian home in the al-‘Isawiyya town, in occupied East Jerusalem, under the allegation of being built without a permit.

Media sources in Jerusalem said the soldiers surrounded a home, belonging to Khaled Nimir Mahmoud, and ordered him and his family to remove their furniture and belongings, before demolishing the property.

The Israeli army and police said the home was demolished “for being built without a construction permit.”

It is worth mentioning that the army surrounded the entire area around the property, before demolishing it.

The expanding Palestinian families in occupied Jerusalem are largely denied construction permits by the city council, in addition to the excessively high costs of applications, and having to wait for extended periods before the municipality makes a decision.

This is happening amidst ongoing, and escalating, construction and expansion of illegal Israeli colonies, on privately owned Palestinian lands.

In  related news, the soldiers abducted three Palestinians from Balata refugee camp, east of the northern West Bank city of Nablus, after stopping them at a sudden roadblock.

Also at dawn, the soldiers invaded the West Bank city of Bethlehem, in addition to Deheishe, ‘Aida and al-‘Azza refugee camps, Harmala, Husan and al-‘Obeydiyya, and abducted eight Palestinians, including five former political prisoner, during violent searches of homes.