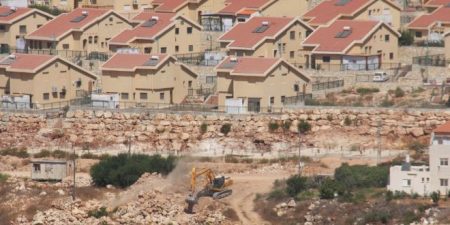 Palestinian farmers in Qarawat Bani Hassan and Deir Istiya, to the west of Salift, said that Israeli bulldozers have been leveling their land lots in an attempt to expand the adjacent (and illegal) Hafat Yair settlement outpost.

PNN reports that, according to the Palestine Information Center (PIC), Israeli forces and settlers declared the razed area a “nature reserve”, preventing Palestinians from growing crops or reclaiming their private lands.

“The Israeli occupation authorities have made use of the nature reserve pretext not to protect nature, as it might seem upon first glance, but rather to grab more land in favor of illegal settlement expansion, as has been the case with Havat Yathir illegal outpost,” researcher Khaled Maali warned.

Maali added that occupation authorities and settlers have both been doing harm to the ecological system and damaging Salfit’s fauna and flora by uprooting olive trees and razing pastoral lands, as they pave the way for the construction of more illegal homes in the area.