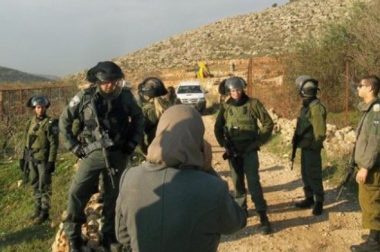 Israeli soldiers detained, Saturday, a Palestinian man and his wife for several hours on their agricultural land in Khallet al-Katla area, in Beit Ummar town, north of the southern West Bank city of Hebron.

The soldiers demanded the two to leave their land and told them they are not allowed to enter their land, or do any work “without a permit” from the Israeli side.

The couple refused to leave their land, and the soldiers threatened to abduct and imprison them if they stay.

They insisted on their right to stay and to continue their work, before the soldiers detained them, but later release them, and they resumed their work.

Farmers in areas close to illegal Israeli colonies in the occupied West Bank face constant harassment, assaults and violations by both soldiers and colonialist settlers, amidst dangerously increasing attempt to steal more land for the constriction and expansion of the colonies, built on occupied lands in direct violation of International Law and the Fourth Geneva Convention.