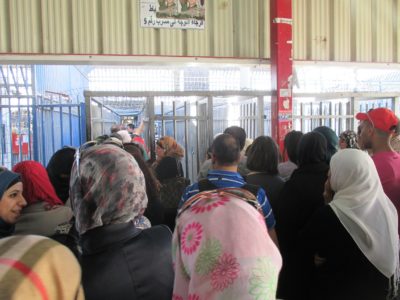 Two Israeli soldiers have been charged with sexually harassing women at the Qalandiya checkpoint near Ramallah, in the central West Bank, and stealing their property.

According to Israeli sources, the soldiers forced women to undress and be subjected to strip searches, touched them inappropriately, and stole money and property from both women and men passing through the checkpoint.

The soldiers in question allegedly molested a number of Palestinian women, after forcing them to be strip-searched. The soldiers serve in the Military Police Corps.

According to the lawyer for one of the soldiers, “This is an excellent and highly valued soldier who serves well in a complex and demanding role. Regarding the property offense, this is a one-time blunder that is unlike him. The soldier completely rejects all the other claims and expected the investigation to end in a way that refutes the allegations.”

The two soldiers are being held in the military brig for one week.

The Qalandiya checkpoint has a history of being a site of harassment of Palestinian civilians by Israeli soldiers, with Palestinians frequently complaining of being brutalized, forced through cattle pens and interrogated while crossing through the checkpoint on their way to work or school.

It is the largest checkpoint in the West Bank, and is the main entry point for Palestinians who need to enter Jerusalem or Israel.

The Times of Israel has written in the past about the Qalandiya checkpoint, pointing out the “difficult conditions that have remained the status quo at the crossing since it was opened in 2002”. The paper noted, “There is only a single toilet — a hole in the ground — currently open at the crossing, where sometimes thousands can wait for hours. The state of the facility is grim, putrid, and the door to the bathroom itself is hanging off of the hinges. This reporter saw both men and women use this toilet. The room designated for men is locked.”

A report from the Israeli organization Machsom Watch (Checkpoint Watch), which sends Israeli observers to checkpoints in different parts of the West Bank, found that in Qalandiya, “The passage was terribly slow and accompanied by the shouts and scolding of the soldiers in the booths.  Every now and again people are stuck in the turnstiles and when another one opens people are sent from one to the other according to what they are carrying, their IDs, their age ; while the orders which are heard come out of the microphone in Hebrew and it is very difficult to understand what they are saying.”