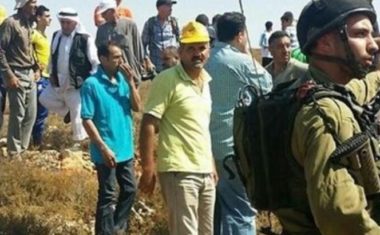 Israeli soldiers wounded, Saturday, at least fifteen Palestinians, including one who suffered a serious injury, in Orif village, south of the northern West Bank city of Nablus, during a nonviolent activity resisting the illegal annexation of Palestinian lands for the construction and expansion of Israel’s colonies.

The Israeli assault took place after dozens of soldiers attacked residents and activists while planting hundreds of olive saplings on Palestinian lands Israel is planning to illegally annex for its colonialist activities.

The soldiers invaded the eastern area of Orif village, and resorted to the excessive use of force, by firing live rounds, dozens of gas bombs and concussion grenades.

The Palestinian Red Crescent Society has reported that the soldiers shot at least three young men with live fire, one of them was shot in the thigh, and one who suffered a serious injury, after the soldiers shot him in the abdomen.

The PRCS added that medics also provided treatment to at least 13 Palestinians, and added that the wounded were injured by Israeli rubber-coated steel bullets, in addition to suffering the effects of teargas inhalation.

Israel has been preventing the Palestinians from planting and taking care of their lands, in order to illegally annex them for the construction and expansion of its illegal colonies, and what the army called “for military purposes.”