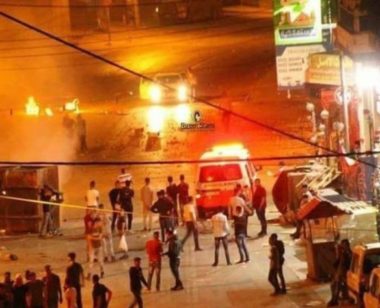 Medical sources said the soldiers shot a young man with a live round in his leg, eight others with rubber-coated steel bullets to several parts of his body, and caused 16 others to suffer the severe effects of teargas inhalation.

The protests took place in Amman Street, east of Nablus city, after the army jeeps and several buses invaded it.

Palestinians believe that Joseph’s Tomb is the funerary monument to Sheikh Yousef Dweikat, a local religious figure. Others believe that the tomb belongs to the Biblical patriarch Joseph, revered by Jews, Samaritans, Christians and Muslims alike.

Although the site is in the city of Nablus, which is under the Oslo Accords is defined as Zone A and therefor under Palestinian administrative and security control, the Israeli army frequently invades the area and prevents the Palestinians from reaching it; the site of Joseph’s Tomb was under Israeli control until they left in October 2000.