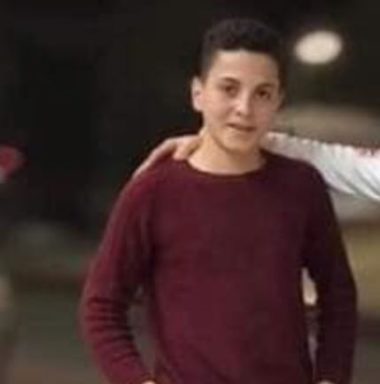 Israeli soldiers killed, Friday, a Palestinian child near the West Bank city of Bethlehem, and injured a young man from Hebron, while trying to enter Jerusalem for Friday prayers in the Al-Aqsa Mosque.

Media sources said the soldiers shot and killed Abdullah Luay Gheith, 16, from the southern West Bank city of Hebron, after opening fire at him and several Palestinians, who were trying to enter Jerusalem from Wad Abu al-Hummus area, near the villages of al-Khass and an-No’man, east of Bethlehem.

The slain Palestinian child was shot with a live Israeli army round in his heart, and died instantly after the soldiers shot him.

They added that the soldiers also shot and seriously injured a young man, identified as Mo’men Abu Tbeish, 21, in the same incident.

It is worth mentioning that the soldiers, stationed at Mazmouria military roadblock east of Bethlehem, opened fire at many Palestinians, who were not granted permits to enter occupied Jerusalem, and were trying to enter the city for prayers in Al-Aqsa.

In related news, the soldiers abducted a young man at Qalandia Terminal, north of occupied Jerusalem, while trying to enter Jerusalem for prayers in Al-Aqsa.