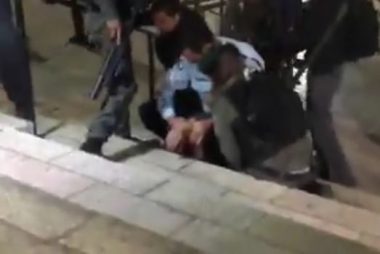 Israeli soldiers attacked, Thursday, dozens of Palestinian protesters, marching in Bab al-‘Amoud area (Damascus Gate) in occupied Jerusalem, and injured  at least 26, including one who was moved to a hospital.

The Palestinian Red Crescent said its medics provided treatment to at least 26 Palestinians, including children, and moved one to a hospital for further treatment.

It is worth mentioning that hundreds of soldiers and officers are deployed in occupied Jerusalem, to suppress and try to prevent protest against the illegal declaration of U.S. President Donald Trump, recognizing the city as the unified capital of Israel.

The soldiers also abducted a young Palestinian man in Sahera Gate area, after repeatedly attacking him, and took him to a nearby police station.