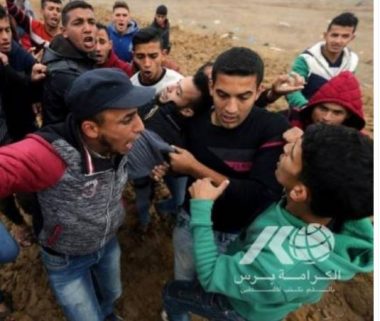 Medical sources have reported that Israeli soldiers shot 25 Palestinians, after the army, stationed across the border fence, attacked dozens of Palestinian protesters in several parts of the besieged Gaza Strip.

The sources said that the soldiers shot five young men with live fire; two of them in the eastern part of Jabalia, in northern Gaza, and were moved to the Indonesian Hospital in nearby Beit Lahia, suffering moderate wounds.

The soldiers also shot one Palestinian with live fire, north of Beit Hanoun, in the northern part of the Gaza Strip, causing moderate wounds.

In addition, the soldiers shot two young men, east of Rafah, in the southern part of the Gaza Strip, before they were rushed to Abu Yousef an-Najjar Hospital.

At least twenty other Palestinians suffered burns or the severe effects of teargas inhalation, and received the needed treatment by local medics.

In occupied Jerusalem, the soldiers attacked dozens of Palestinian protesters, marching in Bab al-‘Amoud area (Damascus Gate), and injured  at least 26, including one who was moved to a hospital.