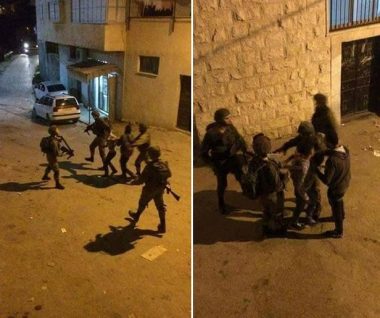 Local sources said the soldiers invaded the village, and attacked dozens of Palestinian protesters, who were marching and chanting against the ongoing Israeli occupation, and the American President’s illegal recognition of occupied Jerusalem as the unified capital of Israel, in direct violation of International Law.

They added that the soldiers fired live rounds, rubber-coated steel bullets and gas bombs, at many youngsters, who threw stones at the invading jeeps.

The soldiers then chased several Palestinians, before assaulting two children, identified as Abdul-Karim Emad Yassin, 13, and Mohammad Lutfi Milhim, 13, and abducted them.

In occupied Jerusalem, the soldiers attacked dozens of Palestinian protesters, marching in Bab al-‘Amoud area (Damascus Gate), and injured  at least 26, including one who was moved to a hospital.

Furthermore, medical sources have reported that Israeli soldiers shot 25 Palestinians, after the army, stationed across the border fence, attacked dozens of Palestinian protesters in several parts of the besieged Gaza Strip.