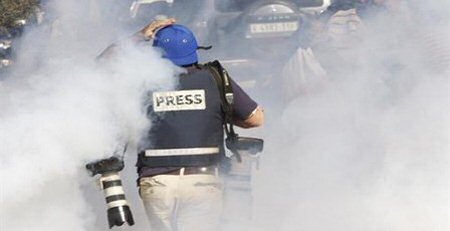 The Israeli occupation carried out 16 attacks, while Palestinian authorities in the West Bank and Gaza Strip committed a total of 10 violations, PNN reports.

Israeli violations
The Israeli occupation has committed a total of 16 attacks against media freedoms during last November, some of which fall under serious violations. The most prominent of these is the decision by an Israeli military court to imprison the broadcasters of  the “Sanabel” radio from the city of Hebron: Muntasir Abdel-Karim Nassar, Nidal Amro were sentenced to 22 months in prison and a fine of 5,000 NIS and Mr. Omran was sentenced to 16 months.
The decision came after months of detention, when Sanabel was raided on August 31, 2016, and its equipmentswere confiscated under the reason of “receiving money from Hamas”.
While the charge of incitement was the most prominent, which was directed to the three journalists Nassar, Amro and Omran, which shows the difference  between what was said during the raiding and confiscation of the radio equipment and between the closure and the arrest of a number of workers and sent to trial later.

In addition to the trial of these journalists, the Israeli occupation forces detained two journalists during the past month. They also detained a group of journalists and staff of seven media organizations for several hours, preventing them from covering a peaceful march against the settlements.

Palestinian violations
Last November, a total of 10 violations were committed by Palestinian authorities (two in the West Bank and eight in the Gaza Strip).

The most prominent of these was the decision by the Palestinian Ministry of Information to prevent the journalist Reem Al-Omari from keeping her position as director ofAhla FM local radio station and demanding that she has to be removed because the Ministry of Interior affairs refused to approve her as a director for reasons that were no explained. This violates the freedom of expression guaranteed by the Palestinian Basic Law.

Journalists working in 8 different Palestinian and foreign media outlets were attacked and where prevented from covering the anniversary of the death  of President Yasser Arafat  that was held in Gaza, and the only media institution that was able to cover this occasion was Palestine TV, although all the journalists had advanced permits to cover this occasion. In addition an indirect threat was directed to an employer by the Palestinian intelligence to lay off a media student who works for him.