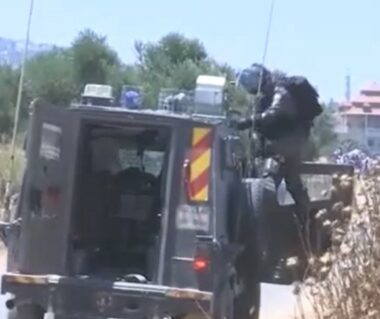 Israeli soldiers injured, Monday, 30 Palestinians, including ten who were shot with rubber-coated steel bullets, during a procession in solidarity with the Palestinian detainees, near the Huwwara military roadblock, south of the northern West Bank city of Nablus.

The procession was organized by the National Committee for Supporting the Detainees in Nablus, in condemnation of the serious Israeli violations and escalation, and the collective punishment, against the detainees in various Israeli prisons.

The protesters marched while carrying Palestinian flags, and chanted for liberation, independence, and the release of all political prisoners from Israeli prisons.

They also saluted the Palestinian detainees who remain steadfast despite the escalating violations against them.

The PRCS added that the medics provided the needed medical attention to the injured Palestinians, and transferred two of them to a hospital for further treatment.

The PRCS also stated that its medics provided treatment to about 20 Palestinians who suffered the effects of tear gas inhalation.

One male journalist and one woman were also among the injured Palestinians.