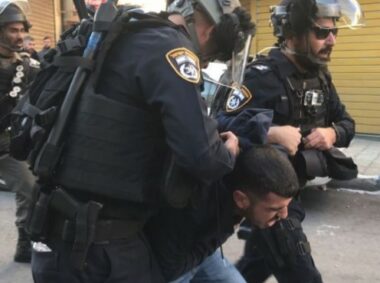 Israeli soldiers assaulted and abducted, Monday, two young Palestinian men near Bab Hutta, one of the gates of the Al-Aqsa Mosque, in the occupied Palestinian capital, Jerusalem.

Eyewitnesses said the soldiers stopped the Palestinians while walking in the area, and repeatedly assaulted them, causing cuts and bruises.

They added that the two young men, identified as Sami Fteha and Mohammad Shalabi, were taken to a detention and interrogation facility in Jerusalem.

In related news, the soldiers installed a military roadblock at the western entrance of Beit Fajjar town, south of Bethlehem, before stopping and searching dozens of cars, and interrogated the Palestinians while inspecting their ID cards.