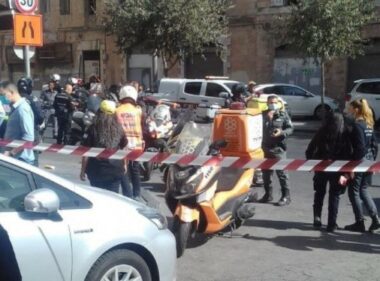 Israeli media sources have reported, Monday, that the soldiers shot and seriously a Palestinian teen after he allegedly stabbed two Israelis at a shop in Jaffa Street, in occupied Jerusalem.

Israeli Police Chief in Jerusalem, Daron Turgeman, said that the Palestinian has been identified as Basel Shawamra, 17, from Doura town, south of Hebron city in the southern part of the West Bank.

He added that the Palestinian is in a serious condition and that he was moved to Shaare Zedek Medical Center in Jerusalem.

Medical sources at the hospital said the Palestinian suffered gunshot wounds to the upper and lower body, and added that he was moved to surgery, but remains in a serious condition.

They also said that the two injured Israelis, in their twenties, were moved to Shaare Zedek, after sustaining upper body wounds, but remained conscious and are in a stable condition.

On Monday morning, the soldiers shot and seriously injured a young Palestinian man near Etzion illegal colony, south of Bethlehem, in the occupied West Bank, after he reportedly attempted to stab soldiers and colonizers.

Israeli media sources said the police in Jerusalem have decided to deploy additional 2000 officers in Jerusalem, in fear of further tension.