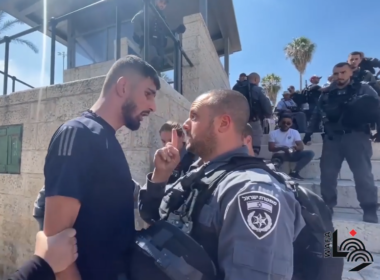 They added that the soldiers attacked the Palestinian protesters with live rounds, rubber-coated steel bullets, gas bombs and concussion grenades, in Bab al-Amoud area and the Old City, wounding 33 Palestinians.

The Red Crescent Society in Jerusalem said that its crews dealt with 33 injuries during the confrontations with the occupation forces in Bab al-Amud and the vicinity of the Old City, 4 of whom were transferred to the hospital.

In addition, the soldiers assaulted many Palestinians with batons, causing several injuries, and abducted six before moving them to detention centers and interrogation facilities.

It is worth mentioning that the soldiers also closed all roads leading to Bab al-Amoud, before stopping and searching dozens of Palestinians, including journalists, and prevented them from entering the area.

The soldiers also forced all Palestinian stores and shops to close, to facilitate the provocative tour and processions of the illegal colonialist settlers.

Furthermore, the soldiers abducted a Palestinian woman, identified as Sabreen Thiab, for waving a Palestinian flag while the colonialist settlers were marching, waving Israeli flags and chanting racist slogans.

The soldiers also abducted Hatem Abdul-Qader, a member of the Revolutionary Council of Fateh movement, while driving his car near Bab al-‘Amoud, and confiscated his car, in addition to summoning many political and social figures for interrogation.