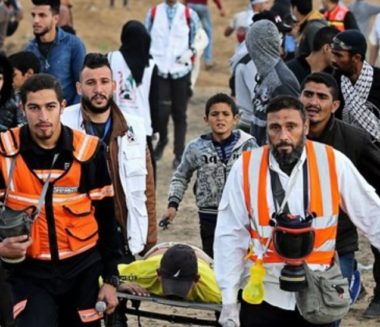 The Palestinian Health Ministry has reported that Israeli soldiers injured, Friday, 37 Palestinians, including 10 children, during the Great Return March processions along the eastern parts of the besieged Gaza Strip.

0The Health Ministry said the four of the injured Palestinians were shot with live rounds, and ten with rubber-coated steel bullets, while the rest suffered cuts and bruises in addition to the severe effects of teargas inhalation.

Thousands of Palestinians held the Great Return March processions which resumed after a three-week halt.

The Higher Committee of the Great Return March said the processions will continue, and affirmed the peaceful nature of the protests, despite the escalation of force and the use of live ammunition by the Israeli soldiers across the perimeter fence.

The Israeli army has killed at least 307 Palestinians, and injured more than 18000 since the processions started on Palestinian Land Day, on March 30th, 2018.