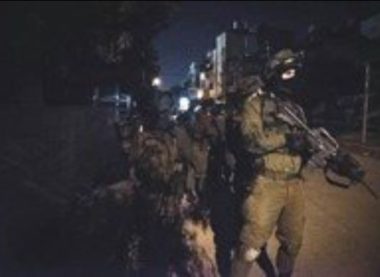 Israeli soldiers abducted, on Friday at dawn, four Palestinians from their homes in the West Bank governorates on Bethlehem and Tulkarem, and summoned a young man for interrogation, after the soldiers stormed and ransacked many homes.

It added that the soldiers also summoned Ibrahim Yassin Srour for interrogation in Etzion military base and security center, south of Bethlehem.

The soldiers also invaded and searched the home of Mo’tasem Ayyoub Jabr, in Beit Jala city, west of Bethlehem, and stole cash and gold from the property.