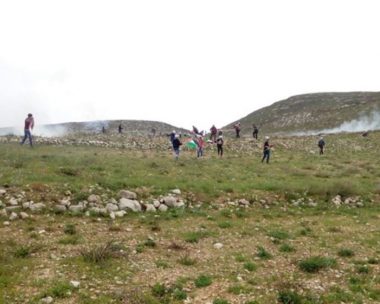 The Palestinian Red Crescent has confirmed that its medics provided treatment to at least 50 Palestinians, who were shot with rubber-coated steel bullets, and dozens who suffered the severe effects of teargas inhalation.

The procession was organized by the National Committee against the Annexation and Colonies, and headed towards the southern area of the village, to plant olive trees in Palestinian lands that were illegally confiscated by Israel, close to Yitzhar illegal colony.

The protesters chanted against the ongoing Israeli violations and escalation, and demanding the return of all illegally confiscated lands, in addition to calling for national unity.

The soldiers instantly started firing rubber-coated steel bullets and gas bombs at them, wounding 50, and causing dozens to suffer the effects of teargas inhalation; among the wounded was Anan al-Ateery, the deputy governor of Nablus, and Khaled Mansour, a member of the leftist Palestinian People’s Party.

Ehab Tahseen, a member of Madama Village Council, said the Palestinians will always plant their lands, despite the ongoing Israeli theft of their property, and added that the protest was held in the village due to the significantly-increasing attacks by fanatic colonist settlers, and the illegal annexation of dozens of dunams from the villagers.

Nablus Governor, Lieutenant Akram Rajoub, said the Palestinians will remain steadfast on their lands, and will increase the popular protests against the illegal occupation and its colonists, and added that Madama was subject to serious Israeli assaults and violations.

The Palestinians mark Land Day each year since Israel, on March 30th 1976, issued illegal orders confiscating thousands of Dunams of privately-owned Palestinian lands, and lands in areas that have a majority of Palestinian population, from the Galilee to the Negev, and declared the lands “closed military zones.”

On that day, the Israeli army killed six Palestinians, injured 96 others and abducted more than 300.