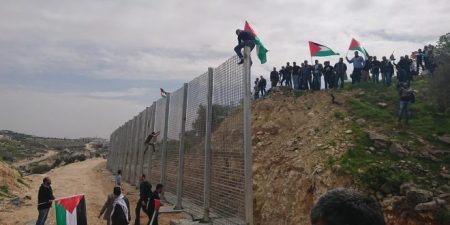 Today, on Thursday, March 30, Land Day was marked with the usual demonstrations in memory of the seizure of 21 thousand dunams of land in Al-Jalil, Al-Muthalth and Al-Naqab on March 30, 1976.

At around 11 am, a march began from Beit Jala and went on until it reached the unfinished fence which marks a part of the Israeli apartheid wall, at the outskirts of Beit Jala.

Here, protesters put up Palestinian flags and set fire to a tire placed on the fence. The burning tire, along with the use of an improvised battering ram, was a symbolic attempt to remove part of the newly built fence, according to the PNN.

The symbolic attempt quickly came to an end, as Israeli soldiers interrupted the protest. As soon as an armored jeep with two soldiers arrived, clashes broke out. The protesters threw stones towards the soldiers, to which they responded with generous amounts of teargas and sound grenades.

A bit later, a police jeep arrived and stopped alongside the military jeep. At this point, the teargas and sound grenades had forced protesters to retreat and disperse. No serious injuries were reported.