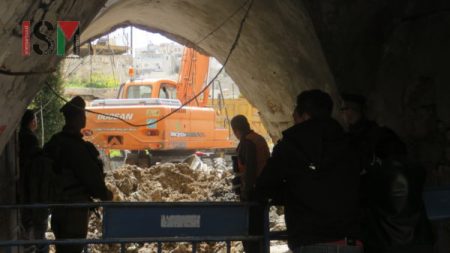 On Wednesday, 29th March, 2017, Israeli forces opened a blocked-off street for the first time in almost two decades to allow long-overdue sewage system works. The alley in occupied al-Khalil (Hebron), open for less than a day, gave Palestinians the rare opportunity to see Shuhada Street and the illegal settlements which have caused countless closures for the civilian Palestinian population.

Palestinians have been pursuing permission, from the Israeli side, to do this maintenance work for years – with no success. The market in the Old Town runs almost parallel to Shuhada Street, where the main settlements in the heart of Hebron are located, and where Palestinians are totally prohibited. As one of the lowest points in the Old City, this area of the “souq” is regularly flooded in winter by rain water and overflowing sewage, as much of the sewage system has been cut off by the illegal settlements. Despite a one-day ‘permit’ granted by Israeli forces, for work to be undertaken, several delays were caused when Israeli forces would not allow additional maintenance vehicles to enter the area. Furthermore, the small amount of time granted by the permit only allowed workers to fix a short stretch of sewage pipe immediately beneath the concrete slabs, with other vital works having to be postponed. 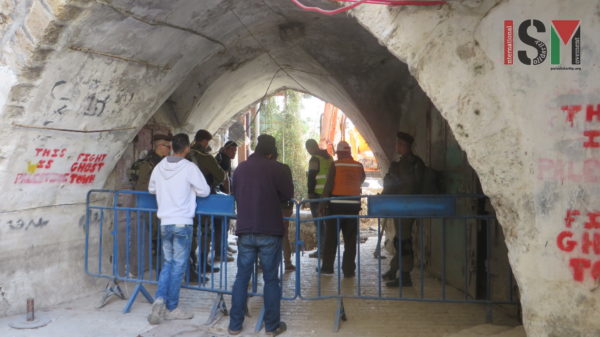 Heavily armed Israeli forces were present on site at all times to ‘guard’ the path to what was once a thriving Palestinian market and the main route between north and south al-Khalil. After the Ibrahimi Mosque massacre in 1994 – in which colonial settler Baruch Goldstein gunned down and killed 29 Palestinians and injured more than 120 more when he opened fire with his machine gun during prayers – Israeli forces have slowly but steadily eradicated the Palestinian presence in Shuhada Street. This process has been achieved through broader, ever-increasing restrictions, harassment, and intimidation towards the Palestinian civil population of al-Khalil.

During the maintenance, passing Palestinians could be seen reacting with surprise and stopping to watch the work and take photographs. Sunlight – long hidden by the high cement slabs barricading the street – suddenly flooded the souq from the small archway. For many Palestinians, this brief opening served as a reminder of a time before the severe crackdown on Palestinian human rights by Israeli forces in the aftermath of the  massacre. One elderly man demanded the soldiers let him through so he may visit his shop, which remains sealed-up on Shuhada Street, where Palestinian movement is entirely forbidden by Israeli forces, to favor and facilitate settler movement. 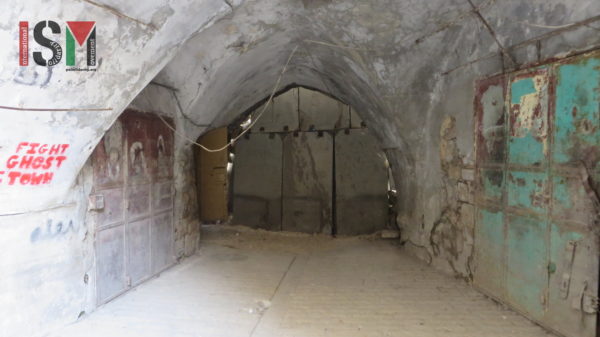 After less than a day of permitted work for Palestinians, the access is tightly blocked off again.