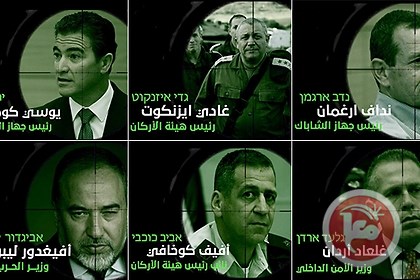 The Hamas movement released a video on Wednesday, threatening top Israeli security officials, as the group continued to vow revenge for the alleged assassination of Mazen Fuqaha, a senior member of the Izz al-Din al-Qassam Brigades — Hamas’ armed wing.

The video then vows revenge for the assassination of Fuqaha, saying that “the type of retribution will be in accordance to the act.”

Unknown assailants opened fire at Fuqaha last week at the entrance to a residence in the Tal al-Hawa neighborhood in southwestern Gaza City, shooting four bullets into the man’s head before they fled the area, witnesses said at the time.

The assassination was carried out with a gun equipped with a silencer, according to member of Hamas’s politburo Izzat al-Rishq.

Ma’an News Agency further reports that Fuqaha, originally from the northern occupied West Bank district of Tubas, was released from serving a life sentence in Israeli custody in the 2011 Gilad Shalit prisoner exchange deal, and then exiled to the besieged Gaza Strip.

According to Israeli media, Fuqaha was a senior member of the Izz al-Din al-Qassam Brigades, and had been sentenced to life in prison after being accused of planning a suicide bombing in northern Israel in 2002 that left nine people dead and tens of others wounded.

Israeli news site Ynet reported that after his release, Fuqaha helped found Hamas’ West Bank headquarters and manage it from Gaza, claiming he has also since “helped organize and conduct terror attacks against Israelis.”

In a statement, the brigades said that it was “clear and obvious that this crime was arranged by the Zionist enemy,” referring to the state of Israel.

They went on to warn that “this enemy will be the ones who suffer the consequences and take responsibility for this crime,” and that Israel would “regret the day” they began carrying out stealth assassinations against “resistance fighters in Gaza.”

The Hamas movement called the assassination “a cowardly attack by the occupation,” promising that Israel would “pay for its crimes.”

Fuqaha’s father, who still lives in Tubas, told Asra Radio that he also accused Israel of the assassination. “Israeli intelligence officers came to our house many times and gave us messages that Mazen would be liquidated if he continued with his actions,” the report quoted him as saying.

He was reportedly shot at close range while he was in his car with six bullets — three to his head, according to Israeli daily Haaretz.