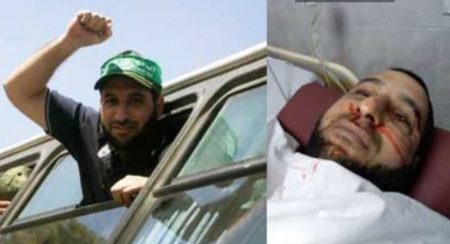 Fahwad Al-Khadoumi (nsnbc) : Mazen Fuqaha, one of the senior leaders of the armed wing of Hamas, has been assassinated, confirmed Hamas’ Al-Qassam Brigades. On their website, the brigades blame Israel, but the list of possible and probable suspects is longer than the PR-laundry list.

Mazen Fuqaha was one of the Palestinians who was released from Israeli prison in 2011, as part of the highly publicized exchange of the captive Israeli soldier Gilad Shalit against a large number of Palestinian / Hamas prisoners.

When he was deported to the Gaza Strip in 2011, Fuqaha was serving nine life sentences for his prominent role in several high-profile operations against Israel and the Israeli occupation.

He was particularly known for having been found guilty for a leading role in a suicide bombing in northern Israel, in 2002, that claimed the lives of nine people and left over 50 other injured.

On Friday, he suffered four gunshot wounds to his head and was later pronounced dead in the Tell al-Hama neighborhood of the Gaza Strip. It is understood that the unidentified perpetrators managed to flee and are now on the run. In the aftermath of the assassination, Gaza police cordoned off the scene and set up checkpoints hunting for suspects.

No details about the caliber and probable make – model of the gun were released, thus far. It was, however, reported that the gunman used a gun with a silencer.

On its website, the Al-Qassam brigades stated, “The equation that the enemy wants to impose (the quiet assassination) will be broken and the enemy will regret this.” The brigades added that the occupation will pay a heavy price for this crime.

Khalil al-Haya, Hamas’s deputy chief in the Gaza Strip, said only Israel would benefit from the death of Fuqaha. “This assassination does not serve anybody but the occupiers; it is of no interest to the other parties.” Iyad al-Bozum, Gaza’s Interior Ministry spokesman, said an investigation into the circumstances of his death has been launched, without elaborating on possible affiliations and motives of the attackers.

Israeli officials have not commented on the murder yet. Israel is rather accomplished when it comes to the art of infiltration and assassination. Israeli involvement would hardly be surprising. That said, it is also not surprising that Hamas and the al-Qassam brigades would use their standard fallback position and blame Israel.

To mention but a few other plausible scenarios which would normally dictate that the circle of possible suspects and the investigation goes beyond “Israel did it”?

One such plausible scenario would be something as mundane as Mazen Fuqaha’s involvement in al-Qassam’s black market economy tied to al-Qassam controlled tunnels and “deals gone wrong” or competition.

Rivalry with other political and or armed Palestinian factions represented in the Gaza Strip is another plausible scenario. Egyptian military intelligence would probably also interested in restraining al-Qassam’s tunneling activities and the al-Qassam brigades cooperation with Muslim Brotherhood and Islamic State linked insurgents in the Sinai.

Hamas’ internal rivalries cannot be excluded as probable cause. While Hamas is often described as a monolithic organization, it is deeply fractured. Internal rivalries in Hamas showed among others when parts of Hamas, in 2012, turned its back on the Syrian government and Iran, when 23 prominent Hamas members were detained by Hamas “security forces” over an attempt to travel to Lebanon and Iran to mend ties with Tehran, when prominent Hamas member Dr. Abou Marzouk demanded that Hezbollah stop its involvement in the Syria war, or when prominent Halas legislator Yahia Mousa warned Hamas would pay a heavy price for its involvement in internal Egyptian affairs.

Also in Opinion/Analysis: 03/19/17 The UN Report Israel Does Not Want You To Read