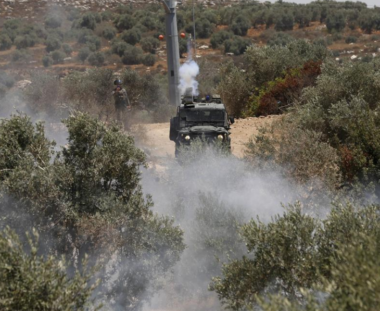 Israeli soldiers injured, on Saturday evening, 51 Palestinians during protests in Beita and Qusra towns, south of the northern West Bank city of Nablus.

Local sources said the soldiers attacked dozens of Palestinians who marched towards their lands while chanting against the ongoing illegal Israeli occupation, and the illegal confiscation of their lands for the benefit of Israel’s colonies.

They added that the soldiers fired many live rounds, in addition to rubber-coated steel bullets, gas bombs, and concussion grenades at the protesters.

It is worth mentioning that, on Friday, the soldiers injured 83 Palestinians in Sbeih Mountain, including eight who were shot with live rounds and ten with the rubber-coated steel bullets.

The Palestinians in Beita and surrounding villages have been holding ongoing protests for the last two months after the colonialist settlers occupied Sbeih Mountain and installed an outpost; the army killed several Palestinians and injured hundreds during these protests.

A week ago, the Israeli colonists left the outpost, which was illegally installed even under Israeli law, after reaching an agreement that would ensure the outpost itself remains intact under the supervision of the military.

Before leaving the illegal outpost, the colonists installed a 13-meter-high Star of David and a sign stating “we will return” next to it.