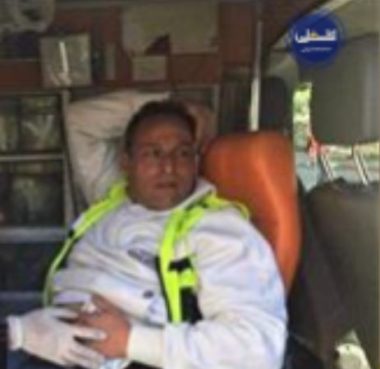 Israeli soldiers shot, Thursday, a Palestinian cameraman working for Reuters, identified as Mohammad Abu Ghneima, and caused dozens of residents to suffer the effects of teargas inhalation, in addition to confiscating surveillance recordings, in Bethlehem, south of occupied Jerusalem, in the West Bank.

Abdul-Halim Ja’afra, the head of the Emergency and Ambulance Department at the Palestinian Red Crescent Society (PRCS) in Bethlehem, said the medics provided treatment to thirty Palestinians who suffered the effects of teargas inhalation.

He added that the medics also provided treatment to the wounded cameraman, who suffered a minor injury, after the soldiers shot him with a rubber-coated steel bullet.

The WAFA Palestinian News Agency said the soldiers also stormed and ransacked several shops and stores, and confiscated their surveillance recordings and equipment.

It is worth mentioning that the soldiers also invaded many neighborhoods in Bethlehem city, and fired many live rounds, gas bombs and concussion grenades at Palestinian protesters, who hurled stones and empty bottles at them.