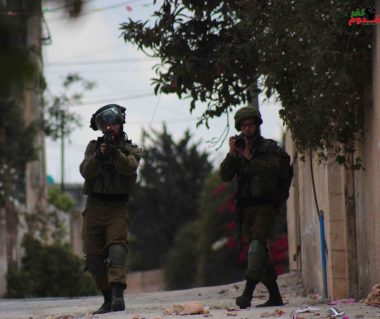 Israeli soldiers shot, on Friday, a Palestinian journalist, and caused many residents to suffer the effects of teargas inhalation, in Kufur Qaddoum, east of Qalqilia, in northern West Bank.

Media sources in Kufur Qaddoum said the soldiers resorted to the excessive use of force against the weekly nonviolent procession, and fired many rubber-coated steel bullets and gas bombs at the protesters, and many journalists.

They added that the soldiers shot Nidal Eshteyya, a cameraman working for the Chinese News Agency, with a rubber-coated steel bullet in his chest, and caused scores to suffer the effects of teargas inhalation.

One of the Israeli rubber-coated steel bullets also struck and broke a camera held by a journalist working for the Palestinian TV.

These week’s procession also comes in solidarity with the al-Khan al-Ahmar Palestinian village, near Jerusalem, facing demolition and displacement by the Israeli forces.