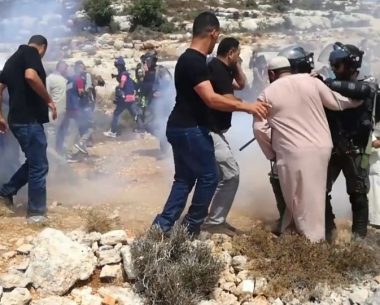 The protesters were nonviolently marching in the weekly procession which was organized by the Popular Committee against the Annexation Wall and Colonies, on Palestinian lands in the ar-Reesan Mountain, threatened with illegal Israeli annexation orders.

The protest was held by locals, and residents from surrounding villages, in addition to international peace activists.

It included planting olive saplings in the threatened Palestinian lands, to express steadfastness and rejection to Israel’s ongoing violations and illegal colonialist activities.

The soldiers fired many gas bombs, concussion grenades and rubber-coated steel bullets, causing many to suffer the effects of teargas inhalation.