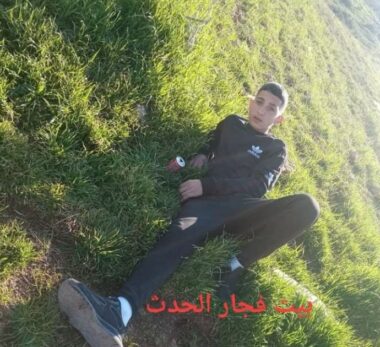 On Wednesday evening, Israeli soldiers injured a Palestinian child after chasing him in Beit Fajjar town, south of Bethlehem, in the occupied West Bank.

Local sources said the child, Ahmad Ayed Thawabta, 13, suffered fractures and bruises in one of his legs after falling when the soldiers chased him during an invasion into the town.

They added that the soldiers detained the child at the western entrance of Beit Fajjar but released him shortly afterward by handing him to the Palestinian District Coordination Office.

Immediately after his release, Palestinian medics rushed the child to Beit Jala governmental hospital for treatment.

In related news, the soldiers invaded Thaher al-Abed village, near Ya’bad south of the northern West Bank city of Jenin, and prevented the Palestinians from digging a water well in addition to confiscating the controller of the digging machine.

On Wednesday at dawn, Israeli soldiers invaded many parts of the occupied West Bank, searched and ransacked dozens of homes, and abducted twenty-two Palestinians, including former political prisoners and siblings.