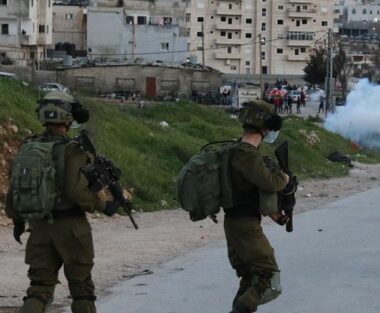 Israeli soldiers shot, Thursday, a young Palestinian man with a round of live ammunition, after the army invaded Zeita village, north of Tulkarem in northern West Bank, and confiscated a mobile home.

The soldiers fired many live rounds and gas bombs at Palestinian youngsters, who protested the invasion and hurled stones at the army vehicles.

Medical sources said a young man, 25 years of age, was shot with a live round in the leg, and was rushed to a hospital in Tulkarem city.

The shed was installed by the Palestinian on his privately owned land, but the soldiers claimed he required a permit from the “Civil Administration Office,” the administrative branch of Israel’s illegal occupation.