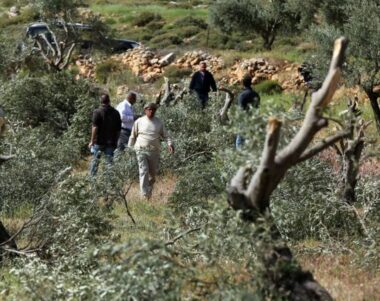 Israeli soldiers invaded, Thursday, a Palestinian orchard in Wad Rahhal village, south of Bethlehem, south of occupied Jerusalem in the West Bank, before cutting and uprooting dozens of olive trees, in addition to demolishing retaining walls.

The head of the Bethlehem office of the “Wall and Colonization Resistance Commission,” Hasan Breijiyya, said the soldiers invaded Khallet an-Nahla area in Wad Rahhal village, before cutting and uprooting dozens of olive trees, which were planted more than ten years ago.

Breijiyya added that the soldiers also demolished retaining walls in the area, before withdrawing.

It is worth mentioning that the area is subject to constant attacks and violations by Israeli soldiers and illegal colonialist settlers, due to its proximity to the Efrat colony, which was built on stolen Palestinian lands.

Two days ago, several colonists invaded Khallet an-Nahla and released their livestock to graze on Palestinian crops, before the locals intercepted them, and forced them out of their lands.

On Wednesday, the soldiers invaded the Einoun area, in the West Bank’s Northern Plains of the Jordan Valley, before uprooting nearly 10.000 evergreen trees and 300 olive trees.

On Tuesday and Wednesday, the soldiers uprooted large swaths of Palestinian lands in the southern West Bank governorate of Hebron, to expand an illegal colony, and abducted a man who tried to prevent the army from uprooting his land.