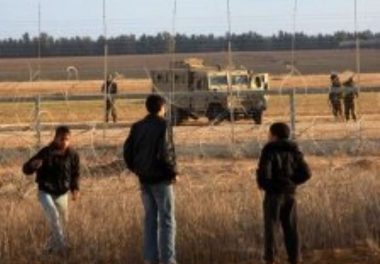 Israeli soldiers shot and injured, Friday, a Palestinian teenage boy, east of Jabalia town, in the northern part of the Gaza Strip,

Dr. Ashraf al-Qedra, the spokesperson of the Ministry of Health in Gaza, said the teen, 16 years of age, was shot with a live round in his leg, and was moved to the Indonesian Hospital, in a moderate condition.

Following the attack, many youngsters hurled stones at the military jeeps, behind the fence, and the soldiers fired additional rounds, gas bombs and concussion grenades.