Israeli Soldiers Injure Dozens Of Palestinians In Jerusalem And Hebron 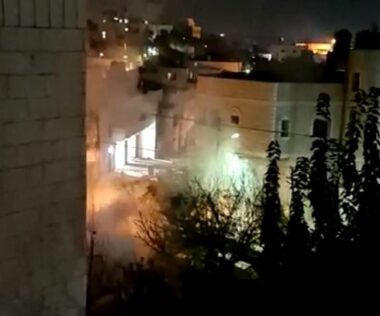 Media sources in al-‘Isawiya, said dozens of soldiers invaded the town, and attacked many Palestinians in the streets and in many stores.

They added that the soldiers fired a barrage of gas bombs and concussion grenades at the residents, causing dozens to suffer the effects of teargas inhalation.

It is worth mentioning that the town has been subject to a serious Israeli escalation, targeting the residents, their homes, and lands, amidst ongoing attempts to illegally annex buildings and lands for the construction and expansion of colonies.

In addition, the soldiers invaded ‘Aseeda area in Beit Ummar town, north of Hebron, and fired rounds of live ammunition, gas bombs, and concussion grenades at Palestinians who protested the invasion.

Medical sources said dozens of residents, including children and the elderly, suffered the effects of teargas inhalation, especially since the soldiers fired the gas bombs at random, many striking homes.