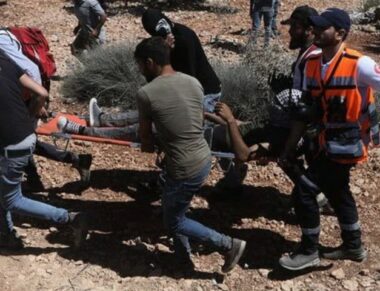 Israeli soldiers injured, Friday, at least seven Palestinians with live fire, and caused dozens to suffer the effects of tear gas inhalation in Beita and Beit Dajan towns, south, and east of the northern West Bank city of Nablus.

Local sources said dozens of Palestinians held the weekly nonviolent processions on their lands protesting their illegal takeover and the constant attempt to confiscate more lands for the benefit of the illegal colonialist activities.

The Palestinian Red Crescent Society (PRCS) said one Palestinian was shot with live Israeli army fire, and two with rubber-coated steel bullets in addition to many who suffered the effects of tear gas inhalation, in Sbeih Mountain in Beita.

The PRCS added that four Palestinians were shot with rubber-coated steel bullets and dozens suffered the effects of tear gas inhalation after the soldiers attacked the protesters on their lands in Beit Dajan.