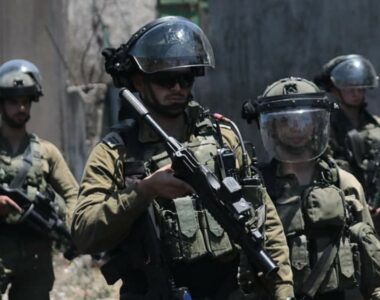 Morad Eshteiwi, the media spokesperson of the Popular Committee against the Annexation Wall and Colonies in Qalqilia, said dozens of soldiers invaded the village, while the locals were holding Friday noon prayers in Omar Bin al-Khattab mosque.

He added that the soldiers invaded several homes and occupied their rooftops before the locals began the weekly procession.

Many Palestinians then hurled stones at the invading army jeeps, before the soldiers fired gas bombs and concussion grenades, causing dozens to suffer the effects of tear gas inhalation.

The soldiers also abducted a young man, identified as Ma’an Amer, and took him to an unknown destination.