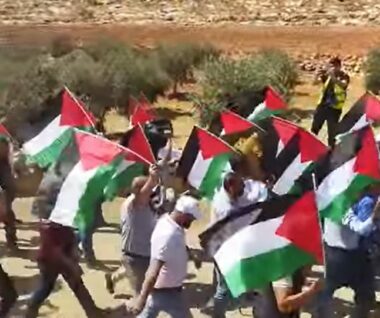 Update: Israeli soldiers injured, Friday, at least ninety Palestinians during protests in Beit Dajan and Beita towns, east and south of the northern West Bank city of Nablus, during processions against the illegal colonialist activities on the Palestinian lands.

– The Palestinain Red Crescent Society (PRCS) has reported that the soldiers injured ninety Palestinians in Sbeih Mountain in Beita town, and in Beit Dajan.

– The PRCS added that among the wounded 13 who were shot with rubber-coated steel bullets in Beita, and 13 in Beit Dajan,

– 74 Palestinians suffered the effects of tear gas inhaltion, in addition to cuts and bruises.

The Nablus office of the Palestinian Red Crescent Society (PRCS) stated that the soldiers shot five Palestinians with rubber-coated steel bullets in Beit Dajan before the medics provided them with the needed treatment and moved them to a hospital for further examination.

The Wall & Colonization Resistance Commission, the Coordination Committee between Palestinian Factions, and the Popular Land Defense Committee participated in the massive procession which started following noon prayers at the mosque in Beita before the residents nonviolently marched toward their lands where the Israeli colonizers installed an outpost.

The soldiers then attacked them with rubber-coated steel bullets and gas bombs, wounding the five Palestinians, and causing a few others to suffer the effects of tear gas inhalation.

In addition, the soldiers shot eleven Palestinians with rubber-coated steel bullets and caused more than seventeen to suffer the effects of tear gas inhalation, in addition to four who sustained cuts and bruises, after the army attacked protesters in Beita.