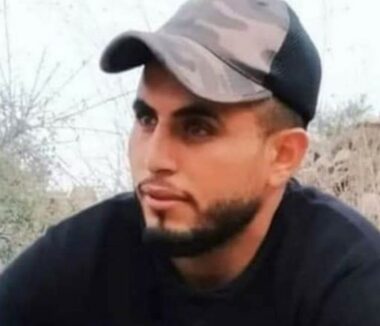 Palestinian medical sources have confirmed, on Friday evening, that the seriously injured young man, who was shot by Israeli soldiers in Beita town, south of the northern West Bank city of Nablus, has died from his wounds.

The sources said the young man, identified as Mohammad Ali Khabisa, 28, from Beita town, was shot with a live round in the head, in Sbeih Mountain, and was rushed to the an-Najah Hospital, in Nablus, but succumbed to his very serious injuries. The slain young man is a married father of an infant girl, only eights months of age, and is the eighth to be killed in Sbeih Mountain since the protests started 140 days ago after illegal Israeli colonizers installed an outpost on private Palestinian lands.

It is worth mentioning that, two weeks ago, the soldiers shot the young man with a rubber-coated steel bullet in the head.

During Friday protests, the soldiers also injured 29 Palestinians, including eight who were shot with rubber-coated steel bullets, 18 who suffered the effects of tear gas inhalation, and two who suffered burns. Updated From:
Israeli Soldiers Injure Dozens Of Palestinians, One Seriously, Near Nablus – Sep 24, 2021 at 16:36

Israeli soldiers injured, Friday, dozens of Palestinians, including one who suffered life-threatening wounds, during processions against the escalating Israeli violations, including the illegal colonialist activities, in Beita and Beit Dajan towns, near the northern West Bank city of Nablus.

The Palestinian Red Crescent Society (PRCS) stated that the soldiers fired dozens of rubber-coated steel bullets, gas bombs, and concussion grenades, at the protesters in Beita town, south of Nablus.

The PRSC said the soldiers shot and seriously injured a young man in the head, before he was rushed to a hospital in Nablus, and was instantly admitted to surgery.

It added that the soldiers also shot eight Palestinians with rubber-coated steel bullets and caused more than 18 to suffer the effects of tear gas inhalation, in addition to two who sustained burns from the gas bombs and concussion grenades.

Furthermore, media sources in Nablus said one Israeli soldier was injured during the protests in Beita town.

In addition, the soldiers shot at least one Palestinian with rubber-coated steel bullets and caused many to suffer the effects of tear gas inhalation, in Beit Dajan village, east of Nablus.