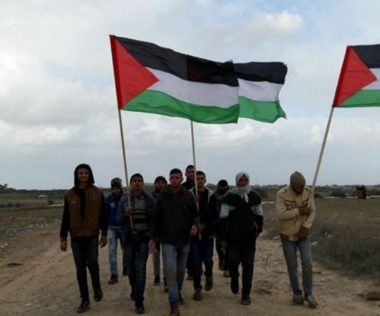 Dr. Ashraf al-Qedra, the spokesperson of the Health Ministry in Gaza, said the soldiers shot six Palestinians with live fire, near the Shuhada Graveyard, and two others in Palestinian lands, near Nahal Oz military base, across the border fence, east of the Sheja’eyya neighborhood, in Gaza city.

He added that the wounded Palestinian received the urgently needed treatment by medics, before being rushed to the Shifa hospital in Gaza, and the Indonesian hospital in Jabalia. Their wounds were described as moderate.

Media sources in Gaza said the bad weather conditions, including the heavy rain, did not deter the Palestinians from marching in Khan Younis, al-Boreij, Gaza c Jabalia and Central Gaza, carrying Palestinian flags and chanting for liberation, before the soldiers opened fire at them.