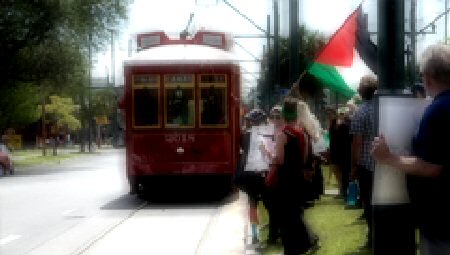 Top New Orleans politicians are pushing to rescind a historic human rights measure because one of the many countries it could affect is the State of Israel.

The New Orleans city council voted unanimously on January 12 to pass a resolution that would have created a mechanism to review investments and contracts with companies that profit from human rights abuses.

The resolution did not once mention Israel. But Israel could have been impacted by the measure, along with other countries that systematically violate human rights.

Five of the city council’s seven members co-sponsored the resolution. Among the five members who supported the measure was New Orleans Mayor-elect LaToya Cantrell.

The human rights resolution was drafted by the New Orleans Palestinian Solidarity Committee, which had the support of Cantrell’s office and met with her several times to discuss the measure.

After a backlash from right-wing pro-Israel groups, however, some of the New Orleans officials who had previously expressed support for the measure are now speaking out against it.

The president of the city council has even said the body is going to reconsider the resolution in its next meeting.

But the New Orleans Palestinian Solidarity Committee also stressed that the resolution equally applies to other countries that engage in systematic human rights abuses, like Saudi Arabia, Turkey, or Honduras.

The Anti-Defamation League, a pro-Israel advocacy group that has a long history of demonizing Black activists, was particularly vocal in opposition to the bill. The Jewish Federation of Greater New Orleans also condemned the measure.

Pro-Israel advocates have long accused Palestinian human rights activists of “singling out” Israel for criticism. Max Geller, an organizer with the New Orleans Palestinian Solidarity Committee, stressed that not only is this false; the opposite is true.

“Pro-Israel groups are exceptionalizing Israel. Israel is not even mentioned in the resolution,” Geller said in an interview with The Real News. “The New Orleans Palestinian Solidarity Committee is not asking the city council for an exception for Israel; the Jewish Federation and the ADL are. What we are asking is that corporations that are complicit in human rights abuses connected to Israel or anywhere else in the world, not be supported by the city of New Orleans. No exceptions.”

Since the unanimous vote, city council president Jason Williams has significantly backtracked on his previous commitment to the resolution. On January 17, Williams released a statement distancing himself from the measure.

Williams said the city council will “reconsider this item” at its next meeting. He insisted he did not know what the BDS movement is and emphasized, “this City Council is not anti-Israel.”

Yet video footage obtained in the past by The Real News demonstrates that the city council president was very much privy to the measure and the human rights advocates who drafted it. A January 2017 video clearly shows Williams speaking at a rally with activists from the New Orleans Palestinian Solidarity Committee, and clapping in support of the resolution.

“I’m here because many of your demands were things that I have worked on and pushed,” he said. An activist with the committee later added, “Councilmember Williams, since you’re here, we’re going to ask you right here, right now, in front of everyone, can you commit to helping us to pass this legislation?” Williams agreed, and the audience applauded

Another video obtained by The Real News, from the day of the vote on the resolution, shows Williams speaking in support of the measure by likening it to the international campaign to boycott apartheid South Africa.

“This is not very different from the stance that a number of entities took when apartheid was commonplace in South Africa, just evaluating what our goals are and what are the goals of the people who will make money from us,” he said.

Max Geller criticized Williams for disavowing a resolution he had previously backed for months. “I’m having a hard time squaring what Jason Williams said in his statement today with reality,” he said.

“It’s a shame that Councilmember Williams is bowing to the interests of powerful pro-Israel groups rather than the broad-based grassroots community groups with whom he worked for over a year on this bill,” Geller added.

Immediately after the January 12 vote, nevertheless, right-wing groups launched a campaign against the resolution.

Critics of the measure say it was not fairly introduced. Sitting Mayor Mitch Landrieu claimed the measure was introduced and voted on “under suspension of the rules and without adequate review and debate.”

Yet even city council president Williams, who has suddenly come out against the measure, conceded in his statement, “I do not believe it was introduced under suspension for any nefarious purpose.”

“What’s really anti-Semitic is erasing Jews who don’t agree with the expansionist, radical settler policies of Donald Trump,” Geller told The Real News. “Jews are not monolithic, and to say we are is in fact anti-Semitic, but I would expect little more from a doctor who is kicking poor people off of health care.”

Geller added, “The senator said that too on the same day he defended Donald Trump saying ‘shithole countries,’” referencing the far-right president’s demonization of African and Latin American countries.

Rather than condemn Trump’s widely panned comments, Cassidy denounced their leaking to the media, complaining that “to go out and report it undermines trust.”

Also from TRNN: 01/16/18 Why is Trump Targeting Palestinian Refugees?