Why is Trump Targeting Palestinian Refugees? 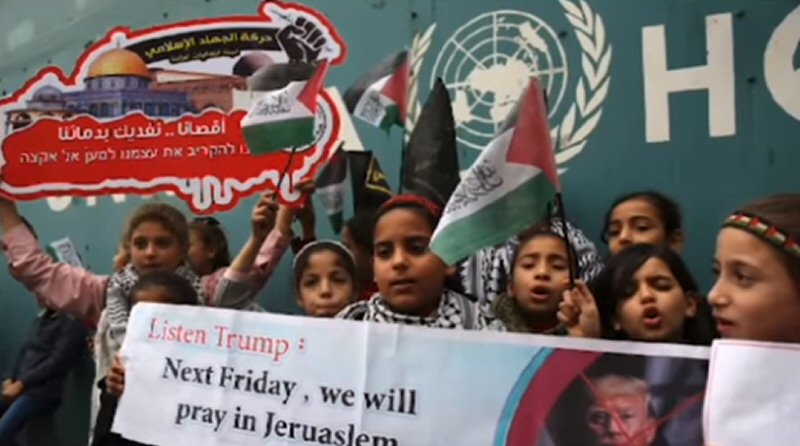 Israeli Prime Minister Benjamin Netanyahu has welcomed US threats to the funding of UNRWA, the UN agency that delivers vital services to millions of Palestinian refugees. TRNN’s Aaaron Maté speaks to Yara Hawari of Al Shabaka – the Palestinian Policy Network.

AARON MATÉ: It’s the Real News. I’m Aaron Maté. Last week, the US Ambassador to the UN Nikki Haley, threatened to cut US aid to UNRWA, the UN agency that provides vital services to millions of Palestinian refugees.

NIKKI HALEY: I think the President has, basically, said that he doesn’t want to give any additional funding or stop funding, until the Palestinians are agreeing to come back to the negotiation table. What we saw with the resolution was not helpful to the situation. We’re trying to move for a peace process but if that doesn’t happen, the President’s not gonna continue to fund that situ-

AARON MATÉ: On Friday, reports emerged that the US has followed through by cutting 125 million dollars in aid and reviewing future payments. The news was welcomed by Israeli Prime Minister Benjamin Netanyahu on Sunday.

BENJAMIN NETANYAHU: I completely agree with President Trump’s harsh criticism of the United Nations Relief and Work Agency. UNRWA is an organization that perpetuates the Palestinian refugee problem. It also enshrines the narrative of the, so called, right of return in a bid to eliminate the State of Israel. Therefore, UNRWA should pass from the world.

YARA HAWARI: Well, I think this is a very significant decision. Just to give you some background on UNRWA. UNRWA was established by the UN General Assembly in 1949. It began its operations the following year. And it was mandated to provide assistance to Palestinians who have been dispossessed in the Palestinian Nakba, also known as the catastrophe that saw Palestine wiped off the map and Israel established in its place. Now, UNRWA’s mandate has developed and evolved over the years to coincide and adjust to regional developments and events. For example, in 1967, when Israel occupied the West Bank, Gaza and the Golan Heights, UNRWA adjusted its mandate to include Palestinians who had been dispossessed in that latest round of settler colonial expansion. Now, today, UNRWA provides services such as health, education to over five million Palestinian refugees in the West Bank, Gaza, Jordan, Lebanon and Syria. They employ a huge number of Palestinians in those areas.Now, importantly, UNRWA was established as a temporary and ad hoc agency. This way, by having a specific agency, Palestinian refugees have become excluded from the Global Refugee Protection Regime. So, UNRWA is a very important feature in the life of Palestinian refugees, but importantly as well, it doesn’t have a political mandate to seek a durable solution, and it’s constantly shied away from this. Actually, it stresses, or highlights rather, that there should be a solution and it doesn’t do much contribute to ideas for that solution. So, the US threatening and cutting its budget to UNRWA is highly significant.The US has previously, last year, donated $350 million to UNRWA, which is about 30% of its overall budget. So, at the moment, everything remains a bit speculative and ambiguous. But, you know, if 30% of UNRWA’s funding was cut, I think it’s entirely likely that the agency would cease to function.

AARON MATÉ: Right. And, the agency is vowing to go on, even in the face of these US cuts, but exactly, it remains to be seen what exactly they can do with such a drastic reduction in funding. Let me ask you. What do you think is the US strategy here? Because, as you say, UNRWA has nothing to do with politics. It’s a humanitarian agency, employing thousands of people and keeping millions alive. So, what are they trying to do, in linking funding to UNRWA with the Palestine Authority’s willingness to enter into the so-called peace process with Israel?

YARA HAWARI: So, I think something that we have to remember in all of this is that holding aid or funding hostage in Palestine in return for political compromise is not something new. I think there’s a lot of outrage at things that the Trump administration says, particularly because quite often they are ambiguous or not particularly well thought out or offensive. But, I think, they are a lot more transparent in their political intention. UNRWA has been made to make compromises many times before in order to continue receiving funding. It’s had to change its schoolbooks to make them more depoliticized. It’s had to pursue a rigorous neutrality doctrine, which sees so much time and money being wasted, so that the agency proves its political neutrality. So, it’s a very confusing threat from the US administration, most of all because UNRWA is separate to the Palestinian Authority. UNRWA is a UN agency and has no bearing on what the Palestinian Authority decides. So, it’s a very strange and ambiguous situation that both UNRWA and the PA find themselves in.

AARON MATÉ: Yara, can you explain the ways in which money and resources have been wasted on proving the agency’s neutrality instead of spending it on helping people?

YARA HAWARI: Yes. For example, during the many military assaults on Gaza by the Israeli Army, UNRWA has constantly had to prove that it’s not hosting or hiding Hamas militants. Really, what this is, is a smoke screen the hinder the agency’s activities, which are, in many cases, life saving activities. More recently, they’ve been forced to put in a lot of effort into proving that they are neutral and they are not taking one side or the other.

AARON MATÉ: Right. So, what is the scenario that plays out if UNRWA has to cut services? I mean, how destabilizing could this be for the camps in Syria and Lebanon? And what does Israel expect to happen? Even though Netanyahu is welcoming this news, wouldn’t Israel be forced to step in to fill the void if the refugee camps in the West Bank and Gaza that ANRWA services, are no longer able to provide the vital aid that they do? And of course, not as if they’re even operating at full capacity already.

YARA HAWARI: Yeah. I think, if UNRWA’s services collapse, those who suffer initially, obviously, will be vulnerable refugees, many of whom, especially in Syria and Lebanon are food insecure. They don’t have adequate housing, or schooling or healthcare. Now, I’m not sure if Israel would be forced to step in. Indeed, Israel hasn’t been forced to do much by the international community. They simply colonize more lands whilst everybody shakes their heads and issues statements of condemnation. I think it may be in Israel’s best interest to manage the situation should UNRWA cease to function properly. But I think it’s important, as well, to stress that Israel and its allies, particularly, the US are very content with maintaining the status quo, which keeps things quiet on the ground and sees the gradual colonization of the entire of Palestine.Again, the sad thing, in all of this, is the ones that will suffer in this game of political posturing are Palestinians and, specifically in this case, the refugees whose rights are continuously being bartered away by leadership in Ramallah. That’s something we should also not forget to talk about that the PA, the Palestinian Authority, is not too concerned with the refugees. They’ve demonstrated this. They’re not concerned about their welfare or their fundamental and inalienable right to return. Let’s not forget that President Abbas, not so long ago, gave up his right to return on Israeli television where, during an interview, he said that he had the right to see Safed, his hometown, but not the right to live there.I think in this current climate, we’ve seen, and the PA has proved that it has very little political backbone. It’s been conceding Palestinian rights in exchange for pockets and illusions of power since Oslo. So, at the moment, there is not a lot of defense being made on the behalf of the Palestinian refugees and I think that’s a very sad thing indeed.

AARON MATÉ: And thank you, for joining us on The Real News.

01/05/18 Report: The Effect of Israeli Tear Gas on Palestinians