The Palestinian Health Ministry in Gaza has reported that Israeli soldiers injured, Friday, 206 Palestinians, including 44 with live fire, and added that seven of the Palestinians suffered life-threatening wounds.

Dr. Ashraf al-Qedra, the spokesperson of the Health Ministry in Gaza, said 120 of the 206 wounded Palestinians received treatment in filed clinics, and 86 others, including 44 who were shot with live fire, were rushed to several hospitals in the Gaza Strip; seven of them are in very serious conditions.

He also stated that at least thirty Palestinians suffered the effects of teargas inhalation.

In his statement Dr. al-Qedra denounced the ongoing Israeli military targeting of medics in the Gaza Strip, and said the soldiers shot two medics, including one woman, and added that at least eight of the wounded Palestinians are children.

Media sources in Gaza said the soldiers shot four Palestinians, including two with live fire, in Abu Safiyya area, east of Jabalia, in northern Gaza, before they were rushed to the Indonesian Hospital in nearby Beit Lahia, suffering moderate wounds.

The army also injured several Palestinians with live fire, and gas bombs, east of Khuza’a town, east of Khan Younis, in southern Gaza Strip. One of them was shot with a bullet in his leg and was rushed to the European Hospital.

On June 20th 2018, a young man, identified as Mohammad Ghassan Abu Doqqa, 22, died of wounds sustained when he was shot and seriously injured by Israeli army fire on May 14th, 2018 during the Great Return March protest.

On June 18, 2018, a child identified as Zakariya Hussein Bashbash, 13, died of serious wounds sustained several days earlier when he was shot by Israeli soldiers at a protest in Gaza.

On the same day that Zakariya died from his wounds, Israeli soldiers killed Sabri Ahmad Abu Khader, 24, after shooting him with live fire near the Great Return Camp, east of Gaza city.

Their deaths bring the number of Palestinians who were killed by Israeli army fire since March 30th, 2018 to 129, including thirteen children.

The army also injured 13878 others, including hundreds of suffered serious wounds, mainly after being shot with expanding bullets.

Among the slain Palestinians are two medics, identified as Razan Najjar, 22, and Mousa Jaber Abu Hassanein, 36, while 223 others were injured, and the army caused damage to 37 ambulances.

Israeli soldier shot, on Friday evening, at least five Palestinians, including two who were shot with live fire, after the army attacked the “Great Return March” protests along border areas, in the eastern part of the besieged Gaza Strip. 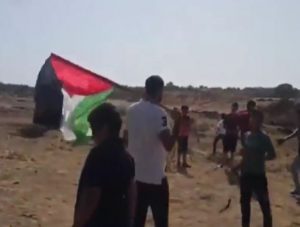 Medical sources at the Indonesian Hospital in Beit Lahia, in northern Gaza, said the soldiers shot two Palestinians with live fire, and two others with gas bombs, near the border fence in Abu Safiya area, east of nearby Jabalia, causing moderate wounds.

The soldiers also fired live rounds at protesters, east of Khuza’a town, east of Khan Younis in southern Gaza, wounding one Palestinian in his leg, before he was rushed to the European Hospital, while several others suffered the effects of teargas inhalation.

Furthermore, dozens of Palestinians suffered the effects of teargas inhalation, after the soldiers fired a barrage of gas bombs at protesters, east of Gaza.