Army Injures Seven Palestinians, Including A Journalist, In Kufur Qaddoum 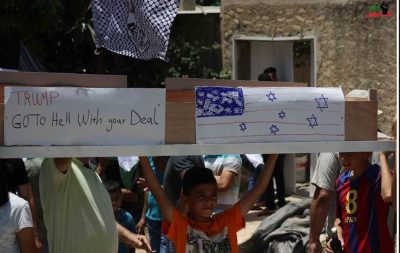 Israeli soldiers injured, Friday, seven Palestinians, including one journalist, after the army attacked the weekly protests against the Annexation Wall and Colonies in Kufur Qaddoum town, east of the northern West Bank city of Qalqilia.

Morad Eshteiwi, the coordinator of the Popular Committee against the Annexation Wall and Colonies, said dozens of soldiers invaded the town, before breaking into homes and occupying their rooftops to use them as firing posts.

He added that the soldiers fired a barrage of gas bombs and rubber-coated steel bullets at the protesters, wounding seven who received treatment by Red Crescent medics.

Eshteiwi also stated that the soldiers invaded his home, causing anxiety attacks among hi children, as the army violently stormed the property and tried to occupy its rooftop.

It is worth mentioning that the protesters, including Israeli and international peace activists, marched carrying Palestinian flags, and chanted against the ongoing illegal Israeli occupation and aggression.

They also carried a mock coffin inscribed with the words “Trump, go to head with your deal” before burning it, and affirming that the Palestinians will overcome all conspiracies against them, against their just cause, and their struggle for full liberation and independence.