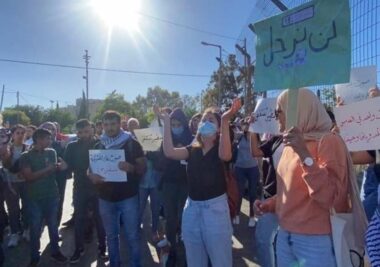 Israeli soldiers attacked, on Saturday evening, dozens of nonviolent protesters during a procession at the entrance of the Sheikh Jarrah neighborhood, in the occupied Palestinian capital Jerusalem, demanding an end to the assaults by the Israeli colonialist settlers and the siege; at least four were injured.

The protesters marched while chanting against the ongoing siege on Sheikh Jarrah for the 14th consecutive day.

The protest was attended by dozens of Palestinians, and many international peace activists, who also condemned the seriously escalating assaults and violations by the soldiers and the colonists targeting the Palestinians, their homes, and property.

The soldiers and police officers attacked the protesters with gas bombs and concussion grenades, wounding four before Palestinian medics rushed them to hospitals.

It is worth mentioning that dozens of additional soldiers and police officers have been deployed at the entrances of the neighborhood, preventing the Palestinians from entering or leaving it, while allowing groups of fanatic Israeli colonists to continue to provocative marches, and assaults. In the year 2020, the United Nations Office for the Coordination of Humanitarian Affairs (OCHA) stated that Israeli colonialist groups filed lawsuits with Israeli courts to displace more than 218 Palestinian families (970 persons, including at least 424 children), in occupied East Jerusalem, including 75 families Sheikh Jarrah neighborhood.