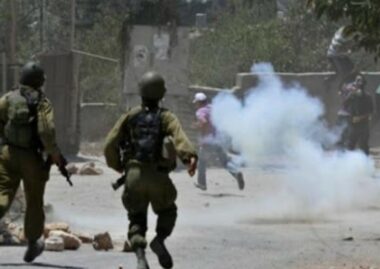 Israeli soldiers injured, on Saturday evening, many Palestinians in Bab az-Zawiya area, in the center of Hebron city, in the southern part of the occupied West Bank; the soldiers also closed the Ibrahimi Mosque in the city to all Palestinians.

Media sources said the soldiers closed the main the Be’er as-Sabe’ road leading to the central market in Bab az-Zawiya and prevented the Palestinians from entering the area to allow groups of fanatic colonizers to march there.

They added that many Palestinians protested the closure before the soldiers fired many rubber-coated steel bullets, gas bombs, and concussion grenades.

Medical sources in Hebron said a teenage boy was shot with a rubber-coated steel bullet, and dozens of Palestinians suffered the effects of tear gas inhalation in addition to cuts and bruises.

In related news, the soldiers closed the Ibrahimi Mosque to all Muslims and visitors, and prevented the Muslims from praying in the holy site to allow groups of Israeli colonizers to pray and visit the mosque marking the “Feast of Sarah.”

Furthermore, the colonizers also assaulted many Palestinians in the Jaber neighborhood in Hebron, and maced them with pepper spray, causing some burns to the face of one child.

In addition, the colonizers hurled trash at members of the local Jaber family and yelled insults at them while Israeli soldiers stood and watched without intervening.